That will be a really quick and short blog post. I would like to share with you a graph which I made when I was checking which services/roles connect to SQL Server and which databases are utilized by particular items.

Click the image if you want to open it in an original/bigger size. 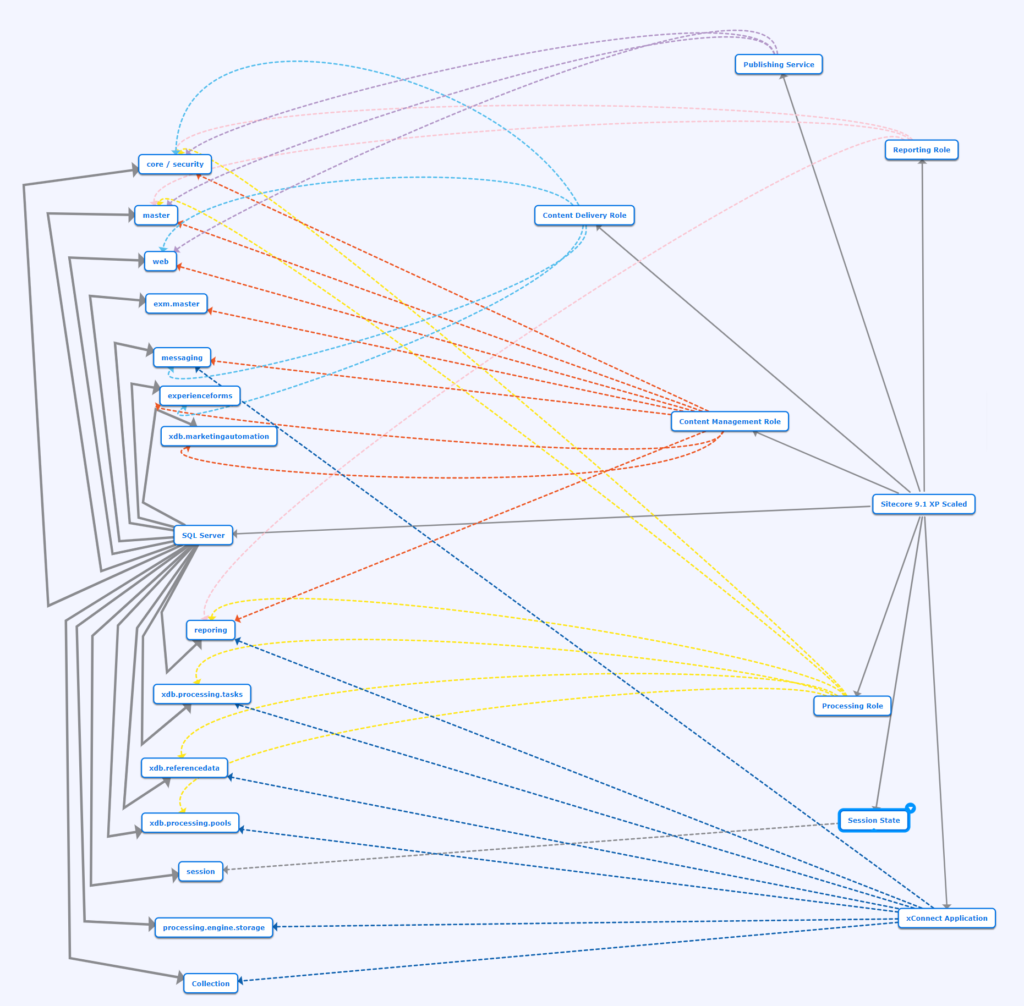 I hope that it will be helpful for you because I believe that one image is worth thousands of words.

Here you have got also mindomo’s file which you can import and edit on www.mindomo.com (works perfectly with google drive): Sitecore 9.1 XP Scaled.mom

I do not know if you are so lucky as I am … but every time when I am trying to install a new version of vanilla Sitecore on my local instance I have got issues which did not appear for other developers.

This time during installation of Sitecore 9.1 which should take 10-15 minutes I noticed that XP0-SingleDeveloper.ps1 script starts and stops more or less in the middle of whole installation process with following error:

I spent few hours trying to fix that. Based on previous experiences with Sitecore 9 and issues which I had with certificates I checked if my xConnect is accessible from the browser – it wasn’t. So I knew why I saw that error.

Usually, when I had an issue with certificates I had to just add those certificates to the trusted list with tool (more details here) but not this time.

I started to search for solution in the internet and found following articles:

The third link has been mentioned in the second link as a solution. In my case, this didn’t help but suggested the solution.

Powershell scripts were moving certificates to Intermediate Certification Authorities category – in theory it should be enough … in my case didn’t change anything so I checked what I had in this directory.

I found out that DO_NOT_TRUST_SitecoreRootCert was added there many times. That was signal to me that it seems to be an issue. I deleted all of them before I tried install Sitecore again. And it worked!

Currently, after installation I have got just one SitecoreRootCert.

This website uses cookies to improve your experience while you navigate through the website. Out of these, the cookies that are categorized as necessary are stored on your browser as they are essential for the working of basic functionalities of the website. We also use third-party cookies that help us analyze and understand how you use this website. These cookies will be stored in your browser only with your consent. You also have the option to opt-out of these cookies. But opting out of some of these cookies may affect your browsing experience.
Necessary Always Enabled
Necessary cookies are absolutely essential for the website to function properly. This category only includes cookies that ensures basic functionalities and security features of the website. These cookies do not store any personal information.
Non-necessary
Any cookies that may not be particularly necessary for the website to function and is used specifically to collect user personal data via analytics, ads, other embedded contents are termed as non-necessary cookies. It is mandatory to procure user consent prior to running these cookies on your website.
SAVE & ACCEPT